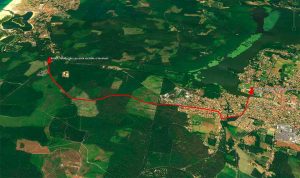 Vieux-Boucau-les-bains is one of the municipalities that welcomes most tourists, especially basques, in the summer months. More information about this beautiful town can be found on another page of this website: Vieux-Boucau-les-bains, a destination for Basque tourism.

This cycle path links the Vélodyssée, at a point on the outskirts of Vieux Boucau, with the town of Soustons (we have put the end of the cycle path at a corner of the Soustons lake, but you could put the end before or after).

In the map above we have marked the beginning of this cycle path at the crossroads with the Vélodyssée, but in reality it can be started from the centre of Vieux Boucau itself, as there are cycle paths that connect the two points.

In this other map you can see the route (all on pistes cyclables) that you have to take to link the centre of Vieux Boucau (in this case, we have chosen the Tourist Office) with that point on the Velodyssee where the piste cyclable to Soustons begins.

This route from the centre of Vieux Boucau to the start of the piste cyclable to Soustons is 3.40 km long, and uses, in any case, a section of the Vélodyssée, as well as urban cycle paths. 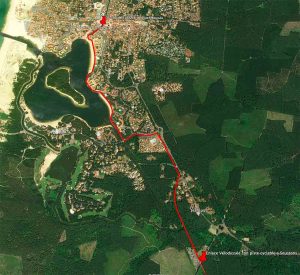 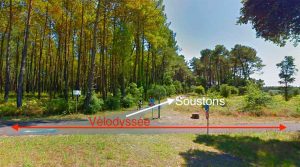 The piste cyclable linking Vieux-Boucau with Soustons starts at this junction shown in the picture.

Links to download the routes and view them on Google Earth: