Vieux-Boucau is undoubtedly one of the places in the Landes region most frequented by basques. In fact, the village has everything you could ask for in a tourist resort: a lake with an outlet to the sea, shops, bars and restaurants, streets and promenades ideal for cycling, and, above all, an extraordinary atmosphere in the pedestrian streets near the lake.

The most populous area is located around Rue Mail Andre Rigal, which is the avenue that leads down to the lake and where, in addition to a small fluted river crossed by small wooden bridges, there are a number of clothes shops, bars and other businesses. 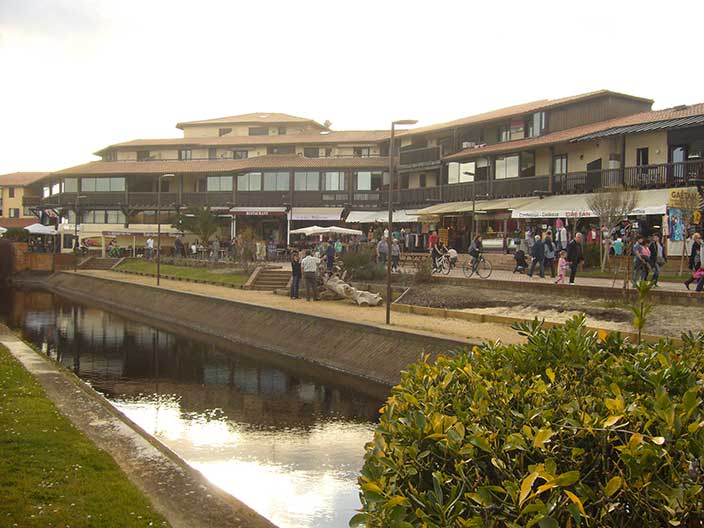 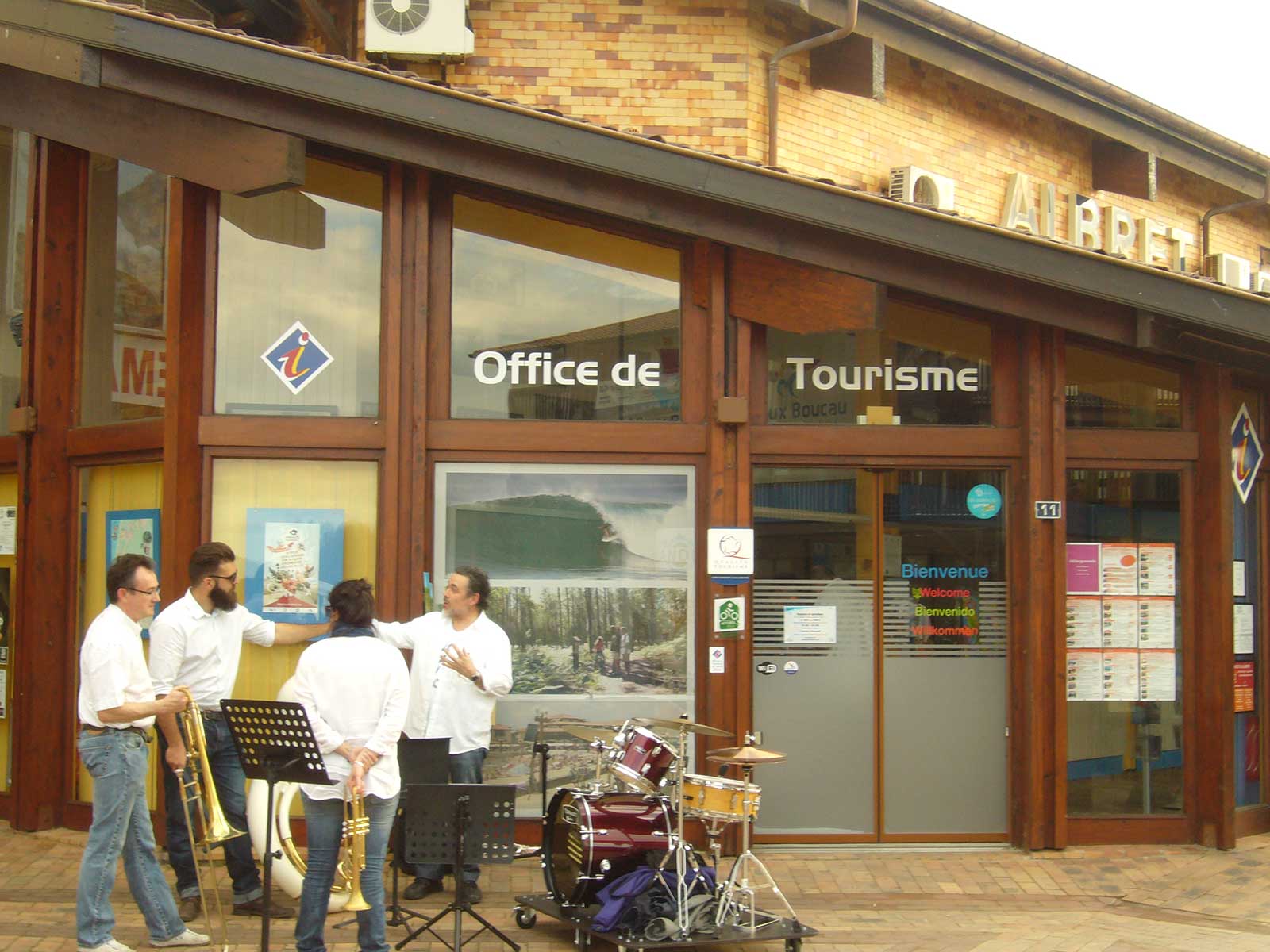 It is also in this street that you will find the Tourist Office, a large and cosy little house where you can get a lot of information about the village and the Landes region.

It is not unusual to see street music groups performing in the area, such as the ones in the picture.

In its shops, which are usually very busy, you can find some bargains on children's and adult clothing, beach articles, as well as a few bars with pleasant terraces .......

...and also, of course, products with typical Basque motifs. 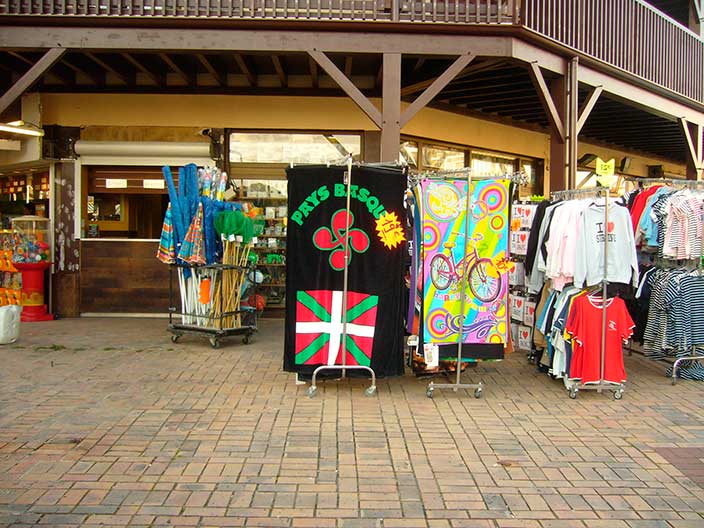 What's more, at the end of Mail Andre Rigal, next to the lake, there are even bars where people follow and cheer on the Basque teams.

It is not difficult in this area to see T-shirts of Basque football teams, the Basque national team or the now defunct Euskaltel-Euskadi cycling team, as well as overhearing numerous conversations in Basque.

However, the last time we were there, the flags of the teams shown in the picture had disappeared.

And from this very point, a long and beautiful promenade by the lake starts, ideal for walking or cycling...

But let's see the location of all this pedestrian area where the summer atmosphere is concentrated with a map of Vieux Boucau (in high resolution, in case anyone would like to download it; just click on the image and download it in the new window): 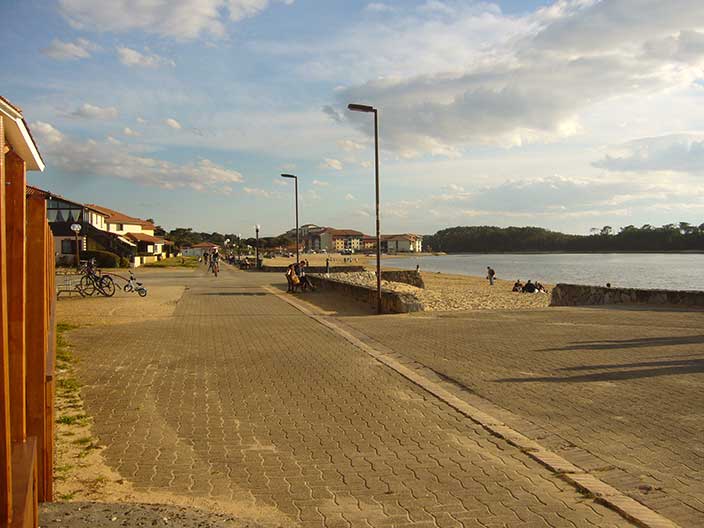 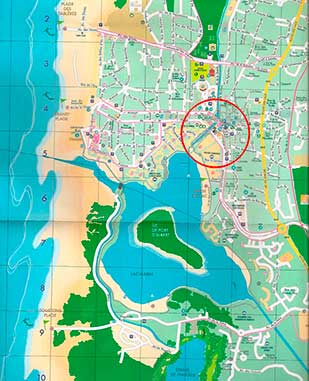 And now a map of the streets included in the red circle: 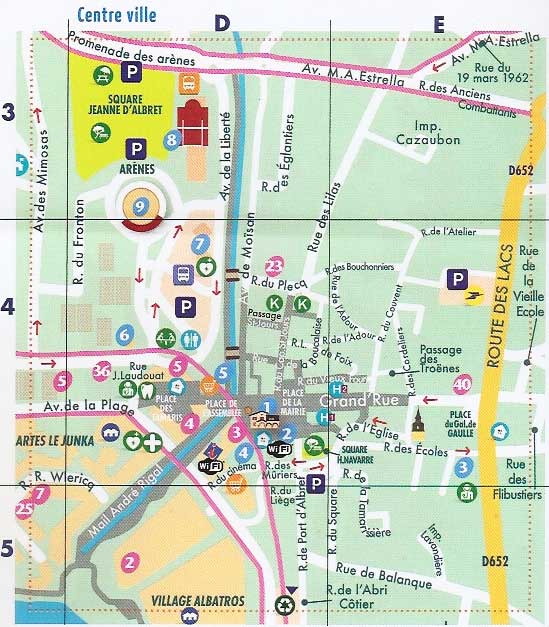 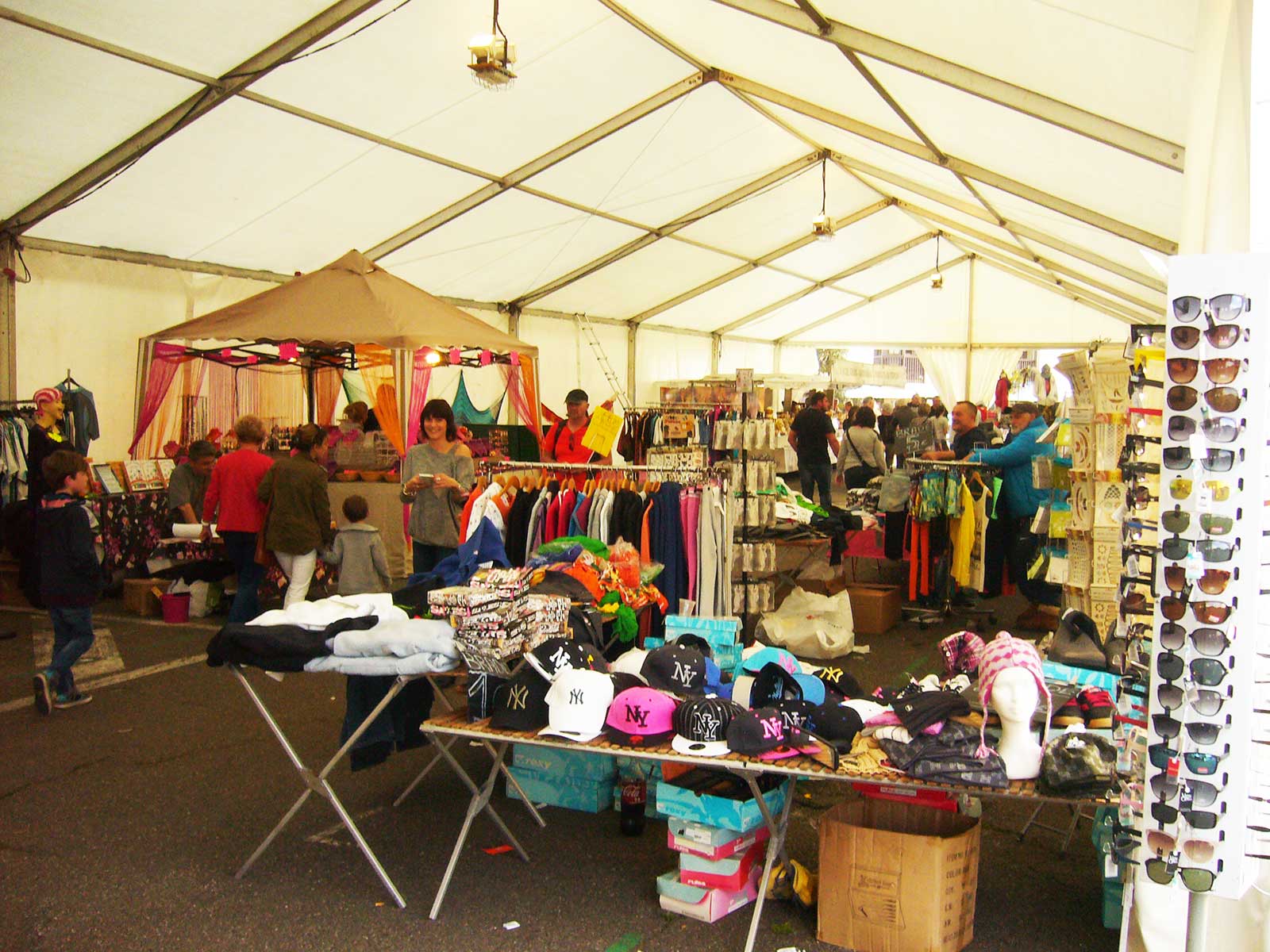 Leaving this street, although without leaving the pedestrian area, we can also enjoy the busy streets, where there are many shops and restaurants, as well as the covered Fair, where we can buy discounted products at good prices...

Let's take a look at some of the sights to be seen in these beautiful streets and squares:

Close to this central space is the well-kept fronton of Vieux Boucau, with a single wall - like most of those in the North Basque Country - which is also located next to a square-park with picnic areas, ideal for eating after a good game of hand-pelota or paddle-tennis. 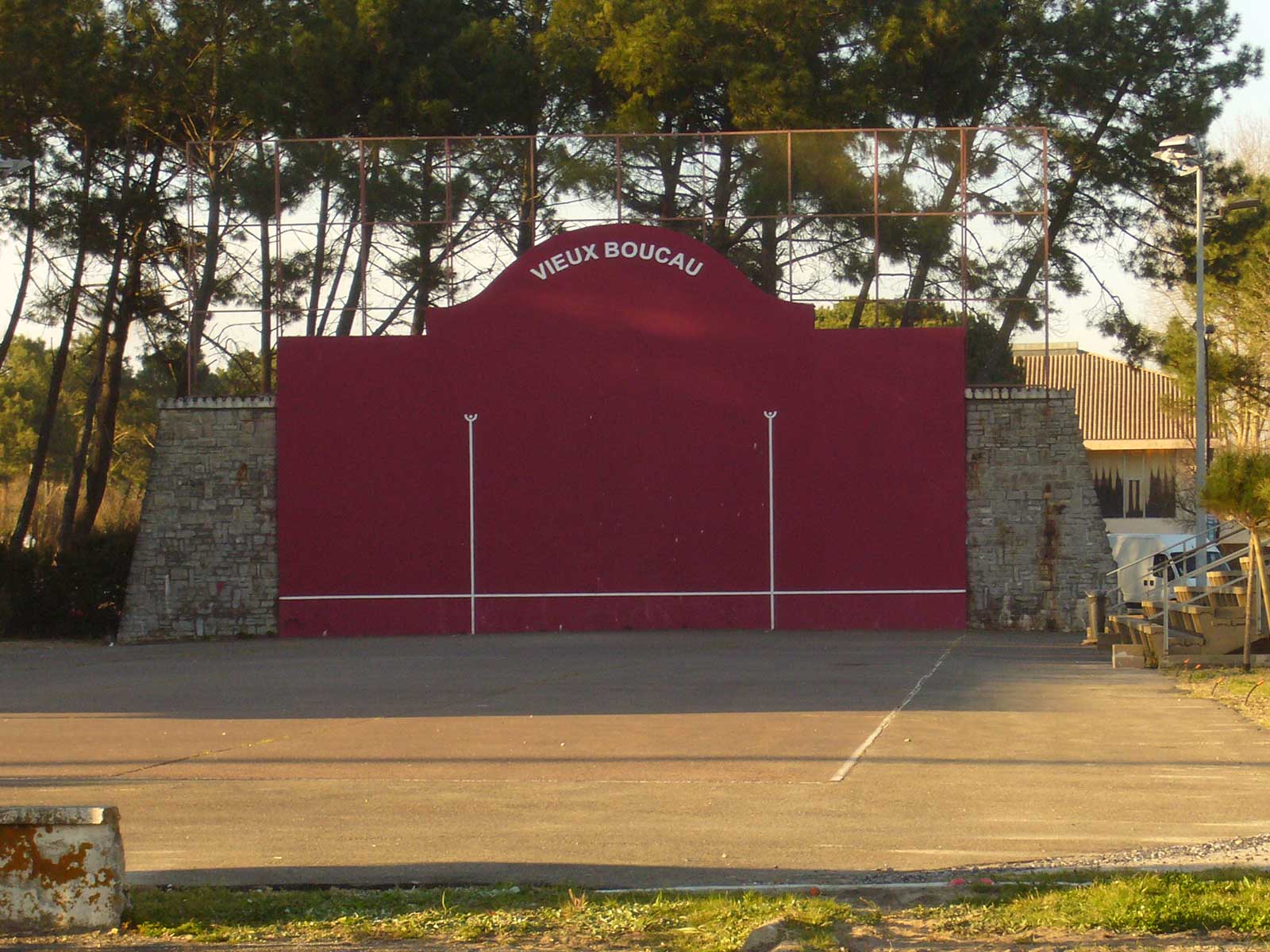 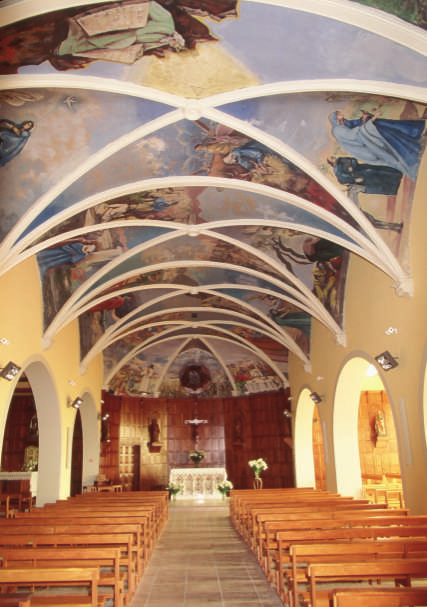 Also noteworthy is the Church of St. Clement, which, although it has no notable architectural values, does include a series of interesting frescoes in its vaults.

The 23 paintings that adorn its ceiling date from 1950 - although they were restored in 2005 - and are arranged in such a way as to guide the believer on his journey from the entrance to the altar.

Thus, the first five frescoes, those closest to the entrance, depict scenes from the Old Testament, while the rest are from the New Testament.

They begin with the infancy of Christ, continue with scenes from the Passion and subsequent Resurrection, and end with images of the Eucharist, including a version of the Last Supper.

- Although it is in fact a small village, Vieux-Boucau-Les-Bains has a number of leisure activities. First of all, as is the case with the whole of the Landes coastal region, the municipality has a large number of pistes cyclables, starting with the Vélodyssée (see the pages of this blog dedicated to the bike paths), which links the town with the villages to the north and south.

- In addition to cycling, you can also go hiking on a small route called La Palombière, a 2 km signposted trail that aims to highlight the natural heritage of Vieux Boucau, its forests, fauna and flora. All along the route there is information on the history of the gemmeurs (resin gatherers). As a curiosity, all the benches and picnic areas along this route have been made from the wood that fell after the Klaus storm.

All the information on this route is available at this page of the web. 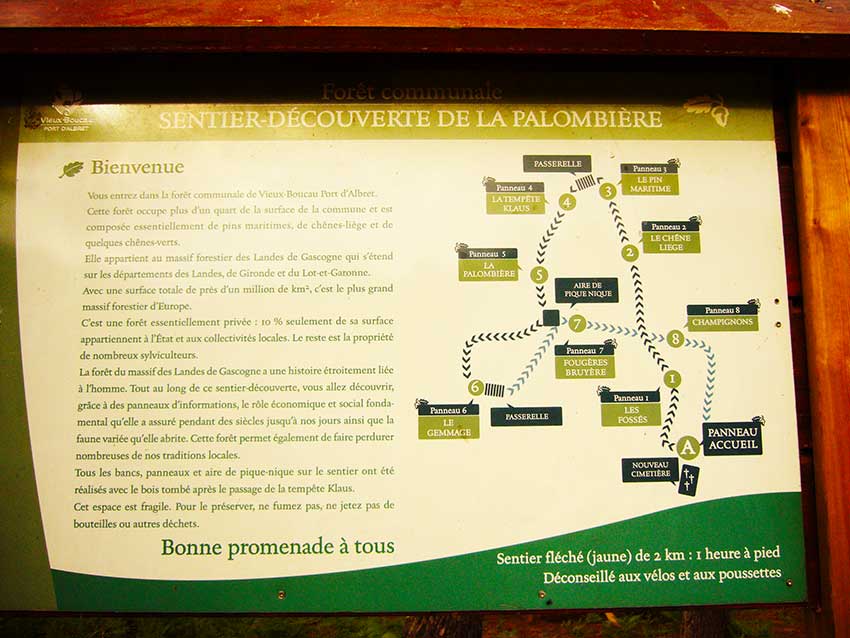 - For cycling or hiking, there is also the lake tour, a beautiful 4 km route starting and finishing in Vieux Boucau. We talked about it in another post on this website.

- For tennis lovers, there is a complex with 16 courts that can be rented by the hour. It is located at number 2 Avenue du Junka, very close to the pedestrian area mentioned above.

- Next to these tennis courts, you will find the Vieux Boucau mini-golf course, a well-kept space that will delight the followers of this sport. There is also a mini-golf course for children from the age of three.

- And of course, of course, there are also water sports activities. On the shores of the lake it is possible to rent kayaks, pedal boats, electric boats or boats with slides, as well as stand up paddle. 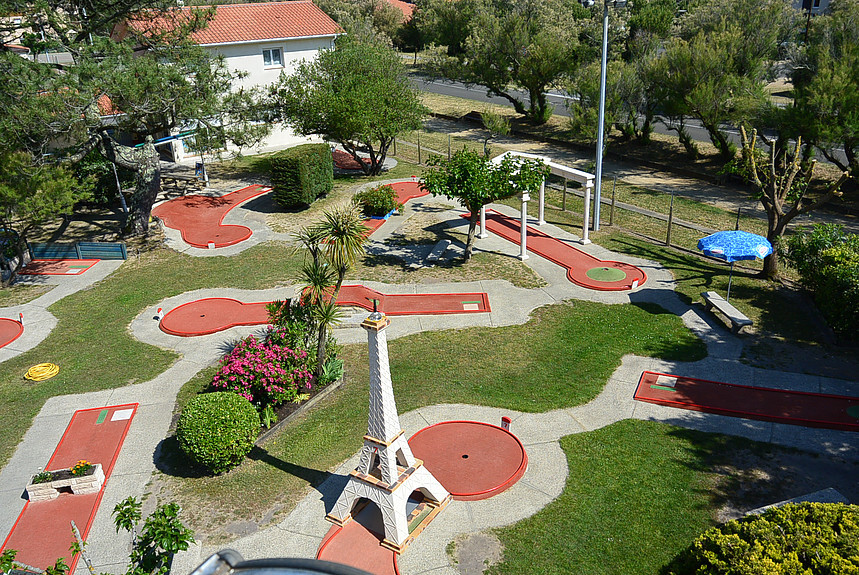