On the outskirts of Vieux Boucau there is a signposted path that is as beautiful as it is interesting. It is a trail for all ages - it is just over two kilometres long - that runs through a beautiful grove of trees and has information panels that provide information - in French - on elements of the forest such as the history of the trees and the work with resin, mushrooms and ferns, insects that threaten the flora, and especially on the places designed for pigeon hunting and to which it owes its name.

The start of the route is on the Avenue de la Foret, a street that is easy to reach both from the main road along the Landes coast - the D652 - and from the piste cyclable that crosses this avenue and has an exit there. It is a matter of following the avenue to the end. Just where the asphalt ends is the start of the route. It is also worth noting that right next to the start there is a free parking area, ideal for those who prefer to arrive by car. 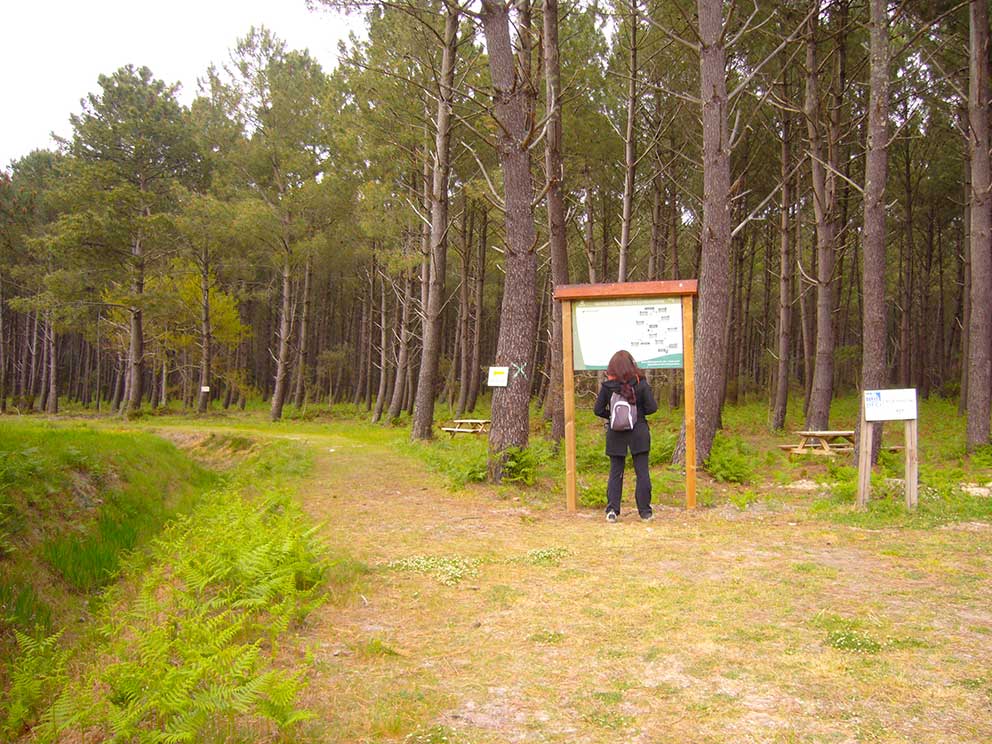 Although the sign advises against cycling and pushchairs, the route is not difficult, and many people use these means of transport. 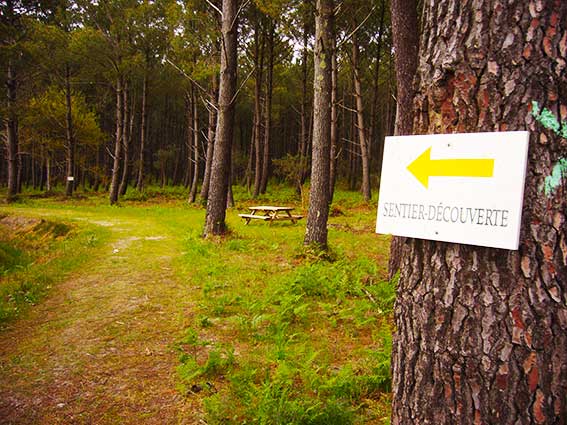 Also at this point there are two typical picnic tables where you can eat before or after the walk, or simply rest and refresh yourself. If at the time of the walk they are occupied, don't worry, there are a few more well-distributed along the route. As you can see in the picture, the entire route is well signposted with yellow arrows, so there is no danger of getting lost. 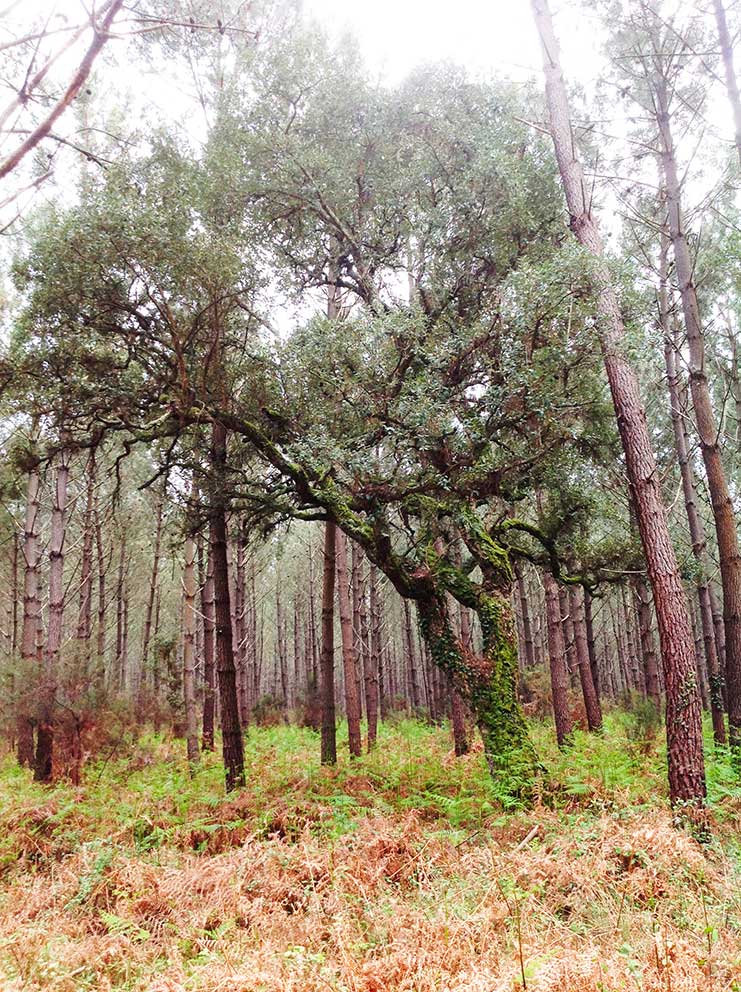 The first part of the route runs between a narrow water channel - although when we were there it was completely dry - on the left and the majestic trees on the right. Among these, this magnificent specimen caught our eye, more typical of thrillers than of the endless French pine forest.

If there is something special about this route, apart from its beauty, it is the sensation of peace that it transmits in each of its sections. Not a sound, not a startle, just the song of the birds that swarm in the treetops and the sweet sound of the leaves moving to the rhythm of the gentle breeze. 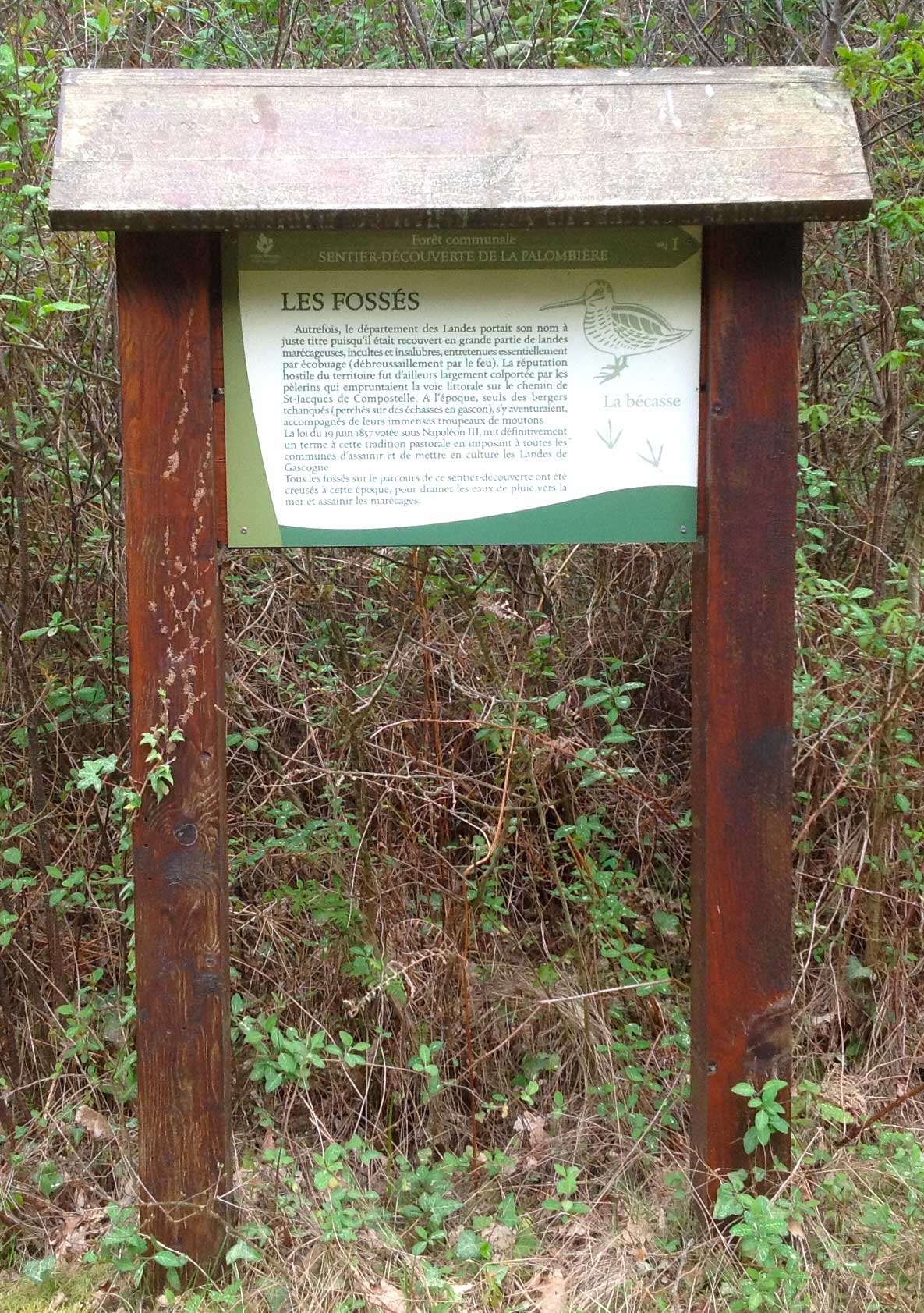 About two hundred metres after the start, the first specific panel appears. This is a sign informing us of the "fossés" (pits) opened in the terrain. As far as we could make out, these were built as a way of draining rainwater during the rainy season and cleaning the swamps that accumulated in the forest. Thanks to these canals, the water was carried to the sea, whose waters are very close to the grove.

The large number of ferns present in several areas along the route is also striking. So much so that there is a panel dedicated exclusively to these vascular plants, which have so many curative properties for both humans and animals, as well as being used as an insecticide. 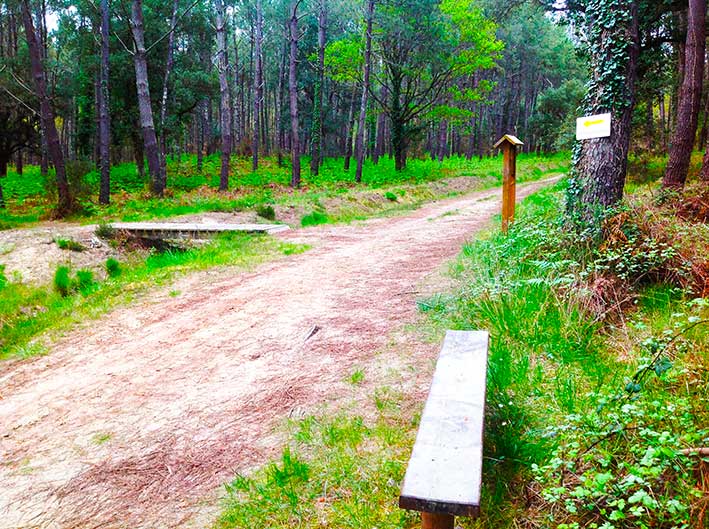 The path continues along the canal, sometimes in a straight line and sometimes winding through the grass and fallen leaves. And so we reach the first crossroads, well indicated by the arrow that tells us to turn left and cross the small but charming wooden bridge. There is also a bench in this space, next to a new panel, where you can get your strength back or prepare your camera or mobile phone to capture such breathtaking beauty.

Among the signs that we can read along the route, those that stand out are perhaps those that refer to the interesting history of the forest and the different vicissitudes it has suffered over the centuries. Thus, we learn that, in the past, many of the locals worked in the resin production of maritime pines, an activity that was repeated in many areas of the Landes.

This flourishing business fed many Landes families until, during the World War, many of the trees were razed to the ground. Although extensive replanting took place later, the business declined, also due to the arrival of new petroleum-based fuels, forcing the Landes people to look for other forms of subsistence. 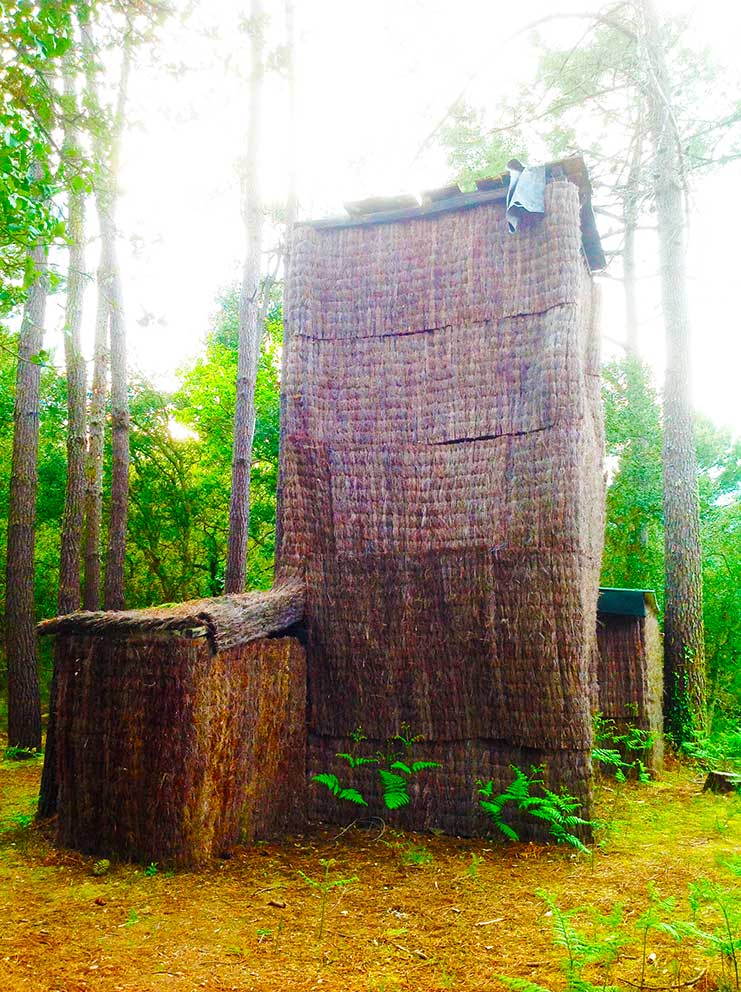 A few hundred metres further on we reach a small peak where the structure that gives the route its name: La Palombiere, appears. These simple but original structures have been used for centuries to hunt wood pigeons, a bird traditionally known in Aquitaine as the palombe.

This hunting technique is unique in that it is only practised in the southwest of France, especially in the month of October, when thousands of pigeons fly over this French region on their return to southern Europe after migration.

Not far from this building, there is also a panel explaining the effect on the trees of the scolyta, an insect that seeks its food in the bark of the trees. The trees defend themselves against the invasion with resin, which makes the insects' action more difficult. However, when the number of gall mites multiplies, becoming a real pest, the tree becomes diseased and eventually dies. 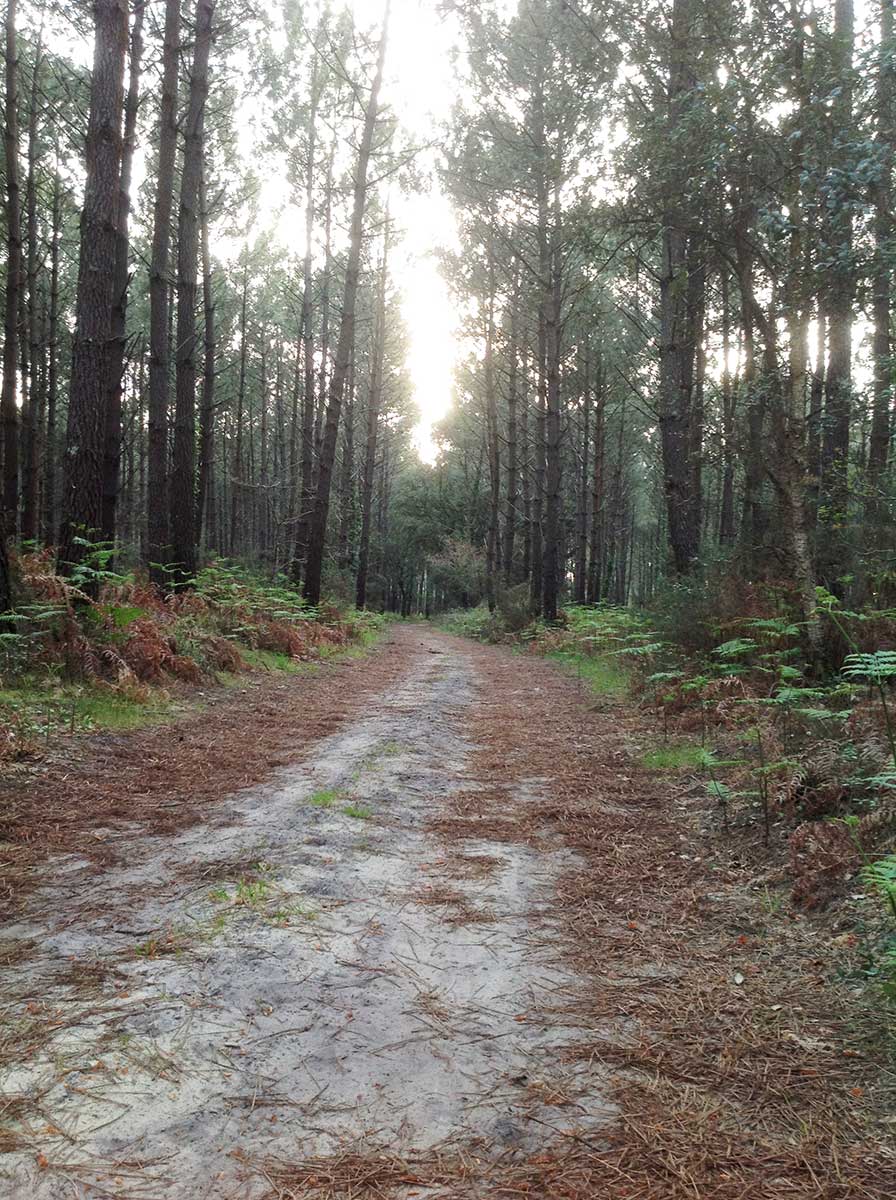 And little by little we reach the end of our little journey, always among trees, grass, leaves, ferns and trills.

In some parts of the route we can contemplate images of unusual beauty, such as this one on the right where, in the middle of the sunset, the sun created a brilliant trail over the path, flooding the treetops with colours and making the green and brown leaves shine before our eyes.