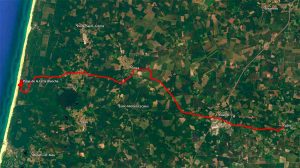 This piste cyclable is called Lo Camin de Hè. At 27 km, it is the longest Piste cyclable (apart, of course, from the Vélodyssée) in the whole of the Landes coastal area, three kilometres longer than the one between Cap de l'Homy and Levignac.

One of its virtues is that its route includes the centres of Vielle, Linxe and Castets, ending also in the centre of the small town of Taller, which allows easy communication between the four municipalities, which it also connects with the La lette blanche beach.

Most of the route follows open roads through pine trees, although when entering the municipalities we have to cross a few streets. 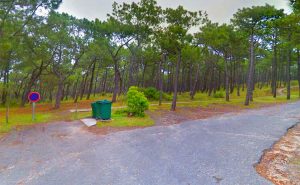 As it is a route that links several population centres, each person will logically start at the one that is closest to their holiday destination.

We have placed the start at the end closest to the coast, which is none other than the Plage de la Lette Blanche, belonging to the municipality of Vielle-Saint Girons.