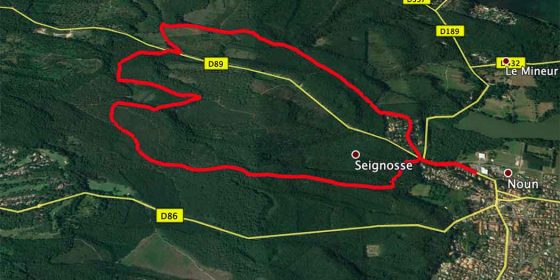 This route starts near the Black Lake (Étang Noir), so called because of its depth, its muddy bottom and the shade provided by the trees on the shore. This lake is the centre of the Nature Reserve of the same name, a natural habitat that provides shelter and food for a large number of species such as the otter, the European mink, the European pond turtle, etc., and which contains areas of peat bogs, wetland areas and mixed pine and oak forests.

The 7.9 km route, mostly on forest tracks, has the occasional steep climb, which is unusual for routes along the Landes coast.

The Avenue du Parc des Sports is the street where the Hall des sports Maurice Ravailhe is located, a building that contains a two-walled pelota court, like those in the South Basque Country, and which is the start of our route.

At the same point, on the corner of the car park and the aforementioned avenue, there is a sign with information about the route.

GPS: SEIGNOSSE. The blue route of the "Tucs".gpx