Contis Plage is a village that is becoming increasingly popular, especially thanks to the Lous Serrots campsite, which welcomes a large number of visitors from April to October. But not many of them have visited the less touristic area known as Contis Sud, which is actually a neighbourhood belonging to Lit-et-Mixe called Les Pelindres.

The route we describe here goes through the relatively few houses in this area and then follows a narrow path through pine trees to reach, parallel to the Contis estuary, near the always lonely southern beach. In this way, the walker will be able to see urban, river, maritime and forest landscapes. 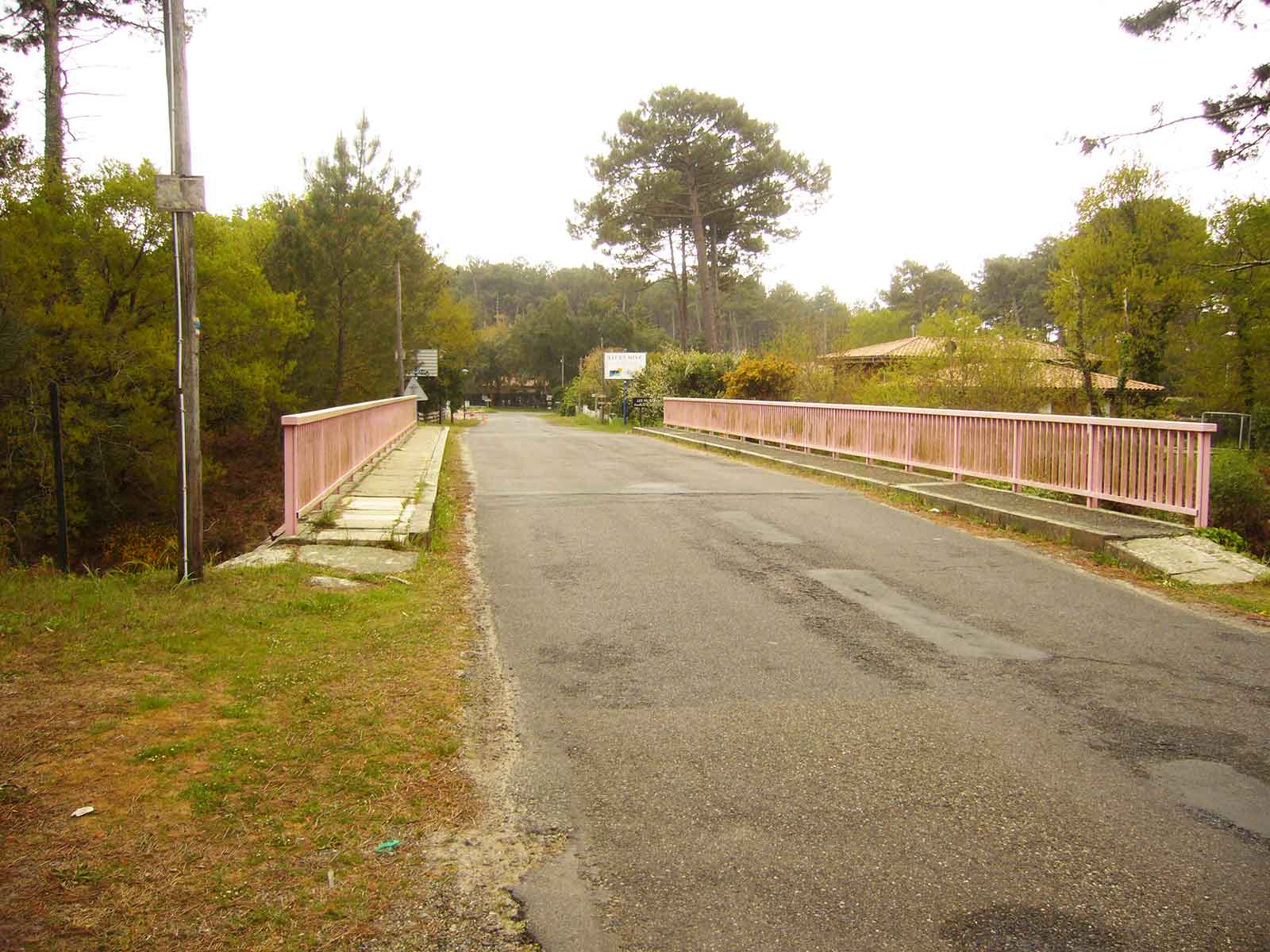 To do this, and assuming the reader is at the aforementioned campsite, simply follow the long straight road in the opposite direction to the tourist area and turn off to the right at the first junction, towards Lit et Mixe. We have included the image above with the initial route in red to make this beginning of the route easier. In any case, after crossing the pink bridge, there are only two streets to follow: Allée du Contour and Impasse des Piballes. 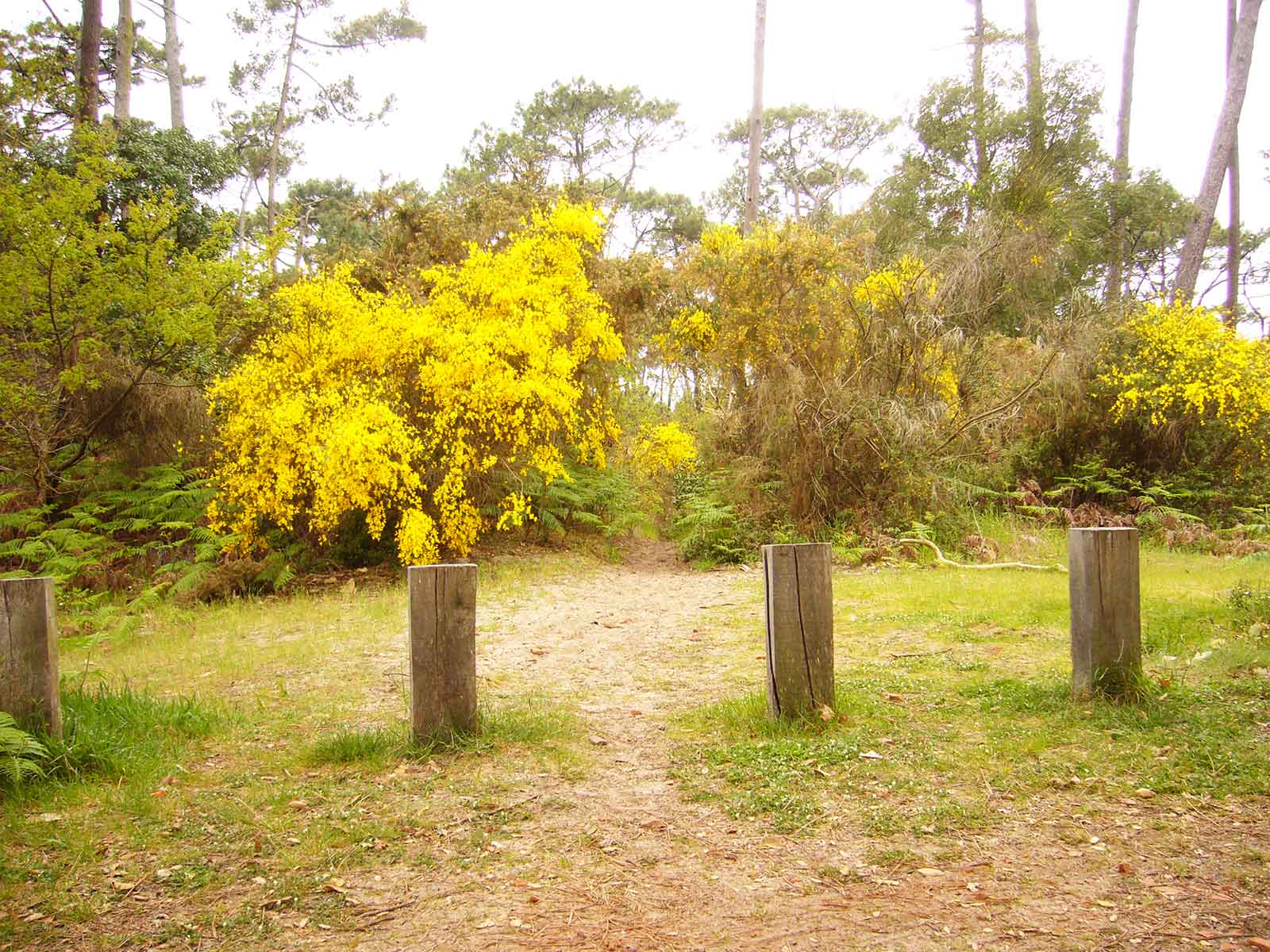 At the end of this last street there is a small path which is used by the inhabitants of this area to go to the river or to the beach to escape from the tourists. There are no signs, which is why we have illustrated it with the image on the left...

You have to follow it between the two posts in the middle, which is where the path is marked out. 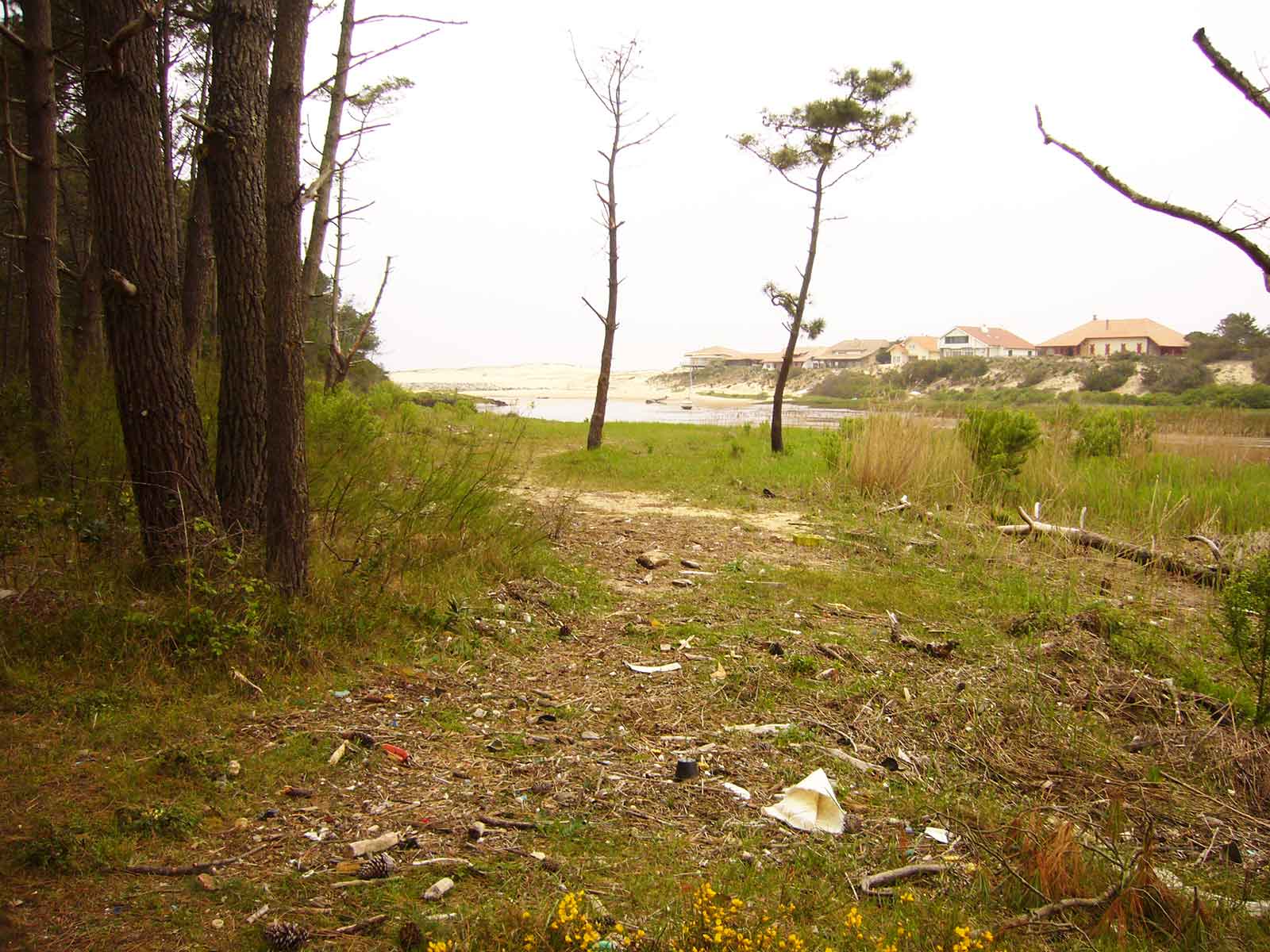 Once there, and after a couple of hundred metres among the ubiquitous pine trees characteristic of the entire Landes region, we will see how the path becomes wider. Shortly after, we can take this turn-off to the right to see the Contis estuary as it flows into the sea. It is a really worthwhile view. From here you can see the estuary, the sea and the northern part of Contis Plage. 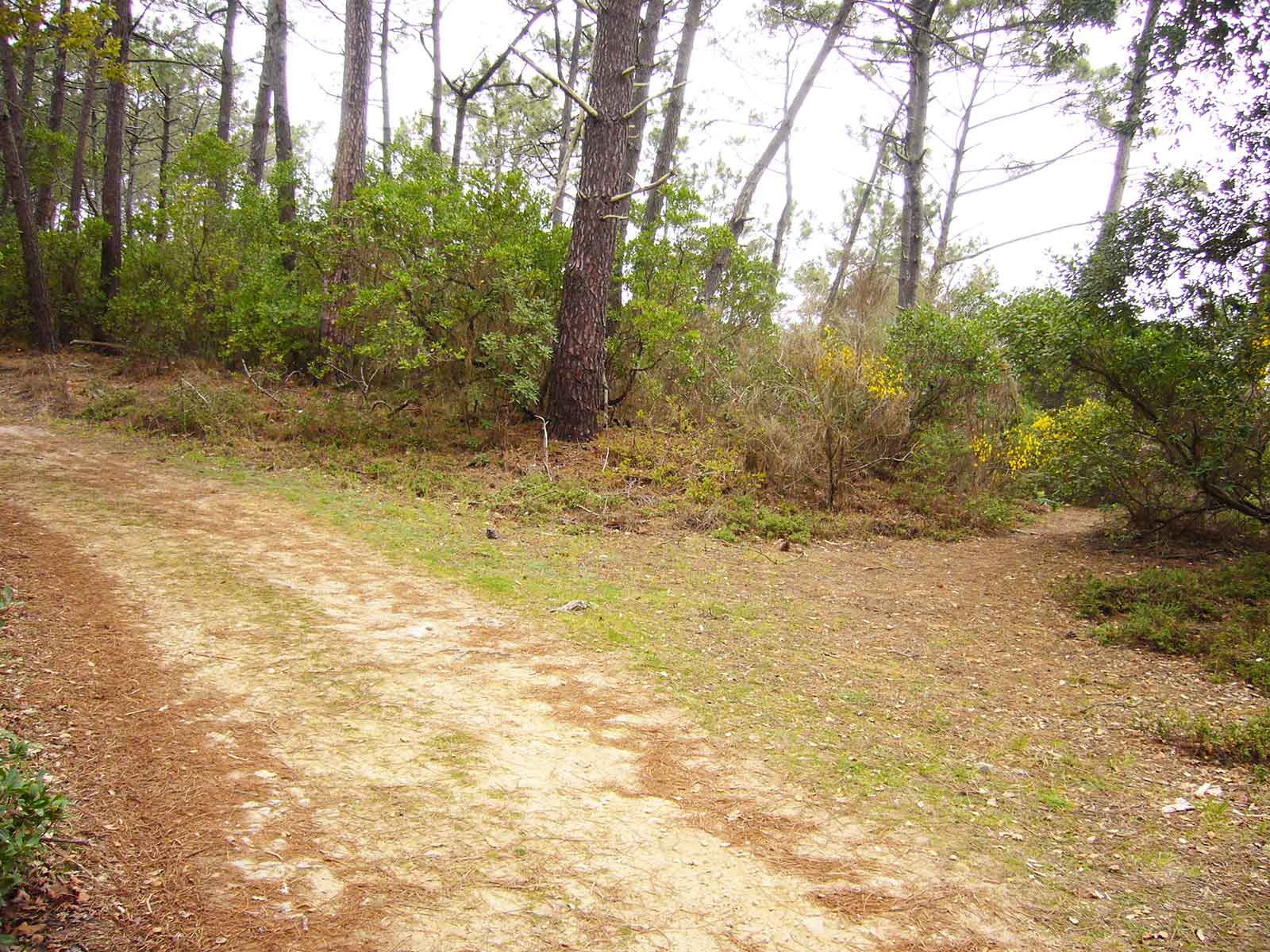 We retrace our steps and return to go back to the path we were on. A few metres further on, a small path opens up on the right (image on the left), which we will follow. 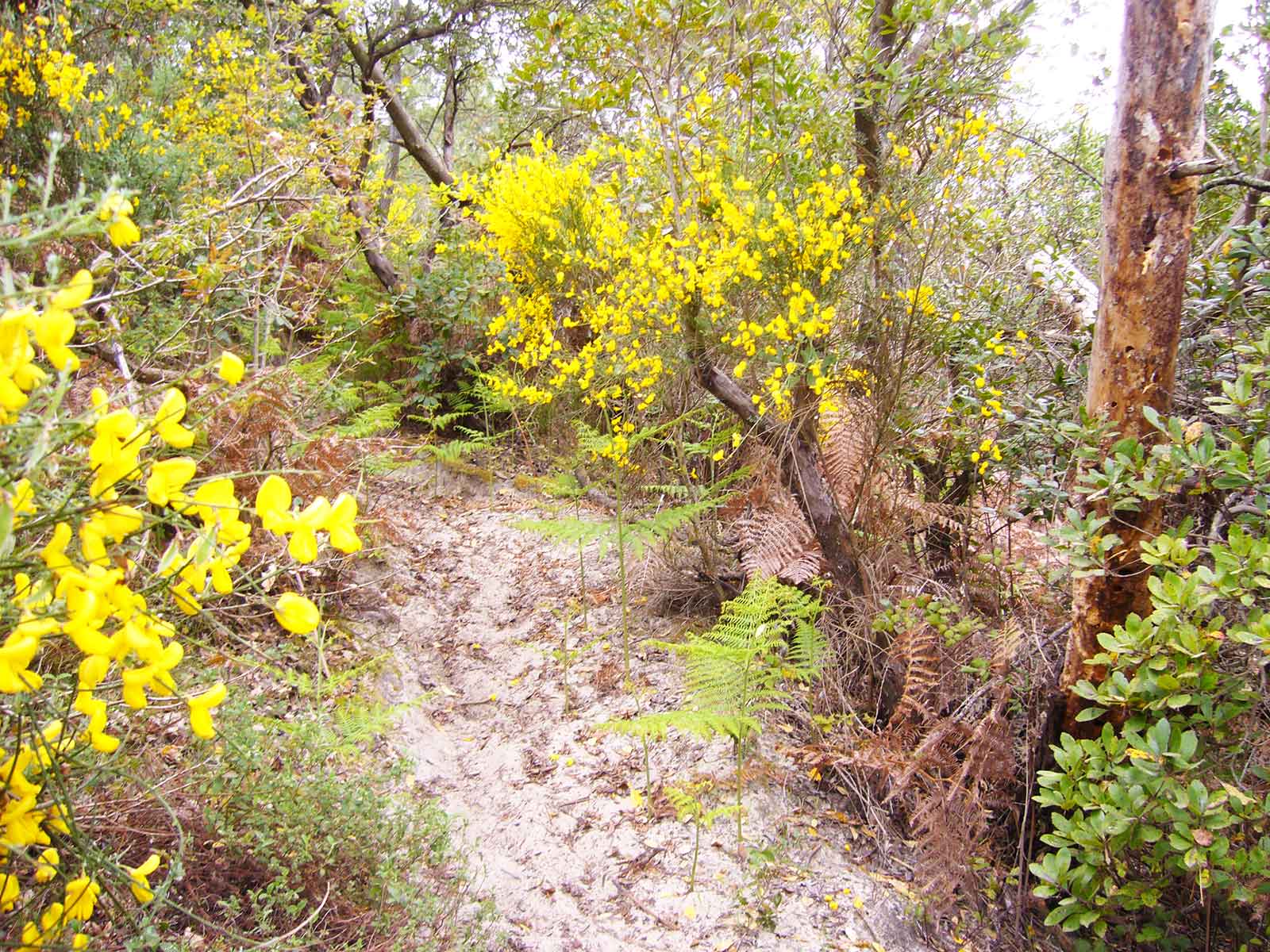 It is really narrow due to the abundant vegetation that surrounds it, but it will be as short as it is beautiful. At several points along this small path we will be able to enjoy beautiful views over the estuary and the north of Contis.

It won't take long to finish this narrow path to reach a large esplanade at the top of the penultimate dune by the sea that is so characteristic of the entire Landes coast. At this point we will have a magnificent view of the entire geography of this Landes enclave. 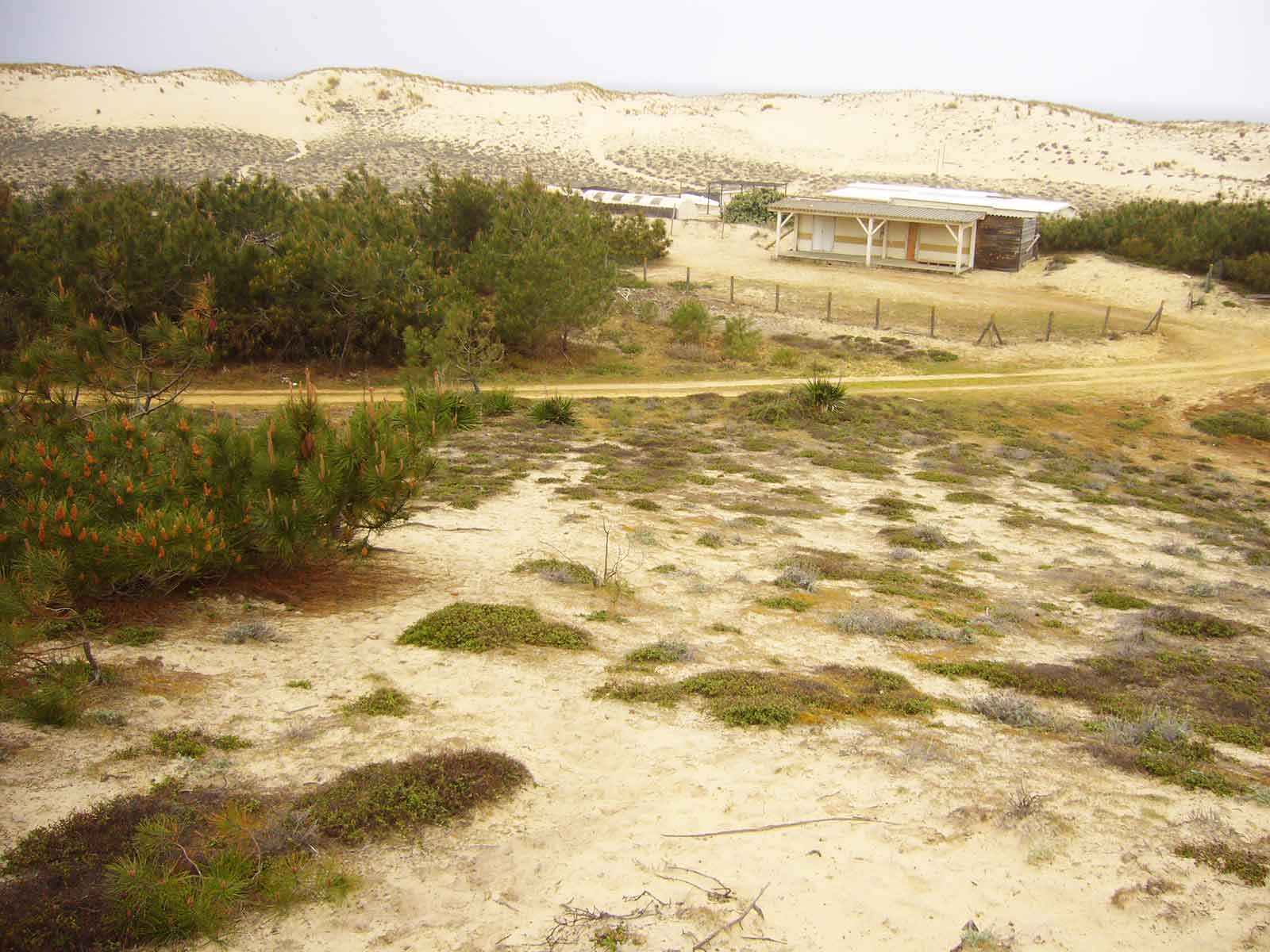 In this open space we can contemplate a wide open space in which a small building survives, which reminded us of a txosna or the typical bar next to any Basque beach. However, this building has always been empty when we have been there, although from time to time a vehicle would appear next to it.

Be that as it may, we have to take the wider path that you can see in the picture and head to the left to start our way back to the centre of Contis, although it is more than advisable to walk a few more metres to be able to enjoy the extraordinary views that can be seen next to the beach. 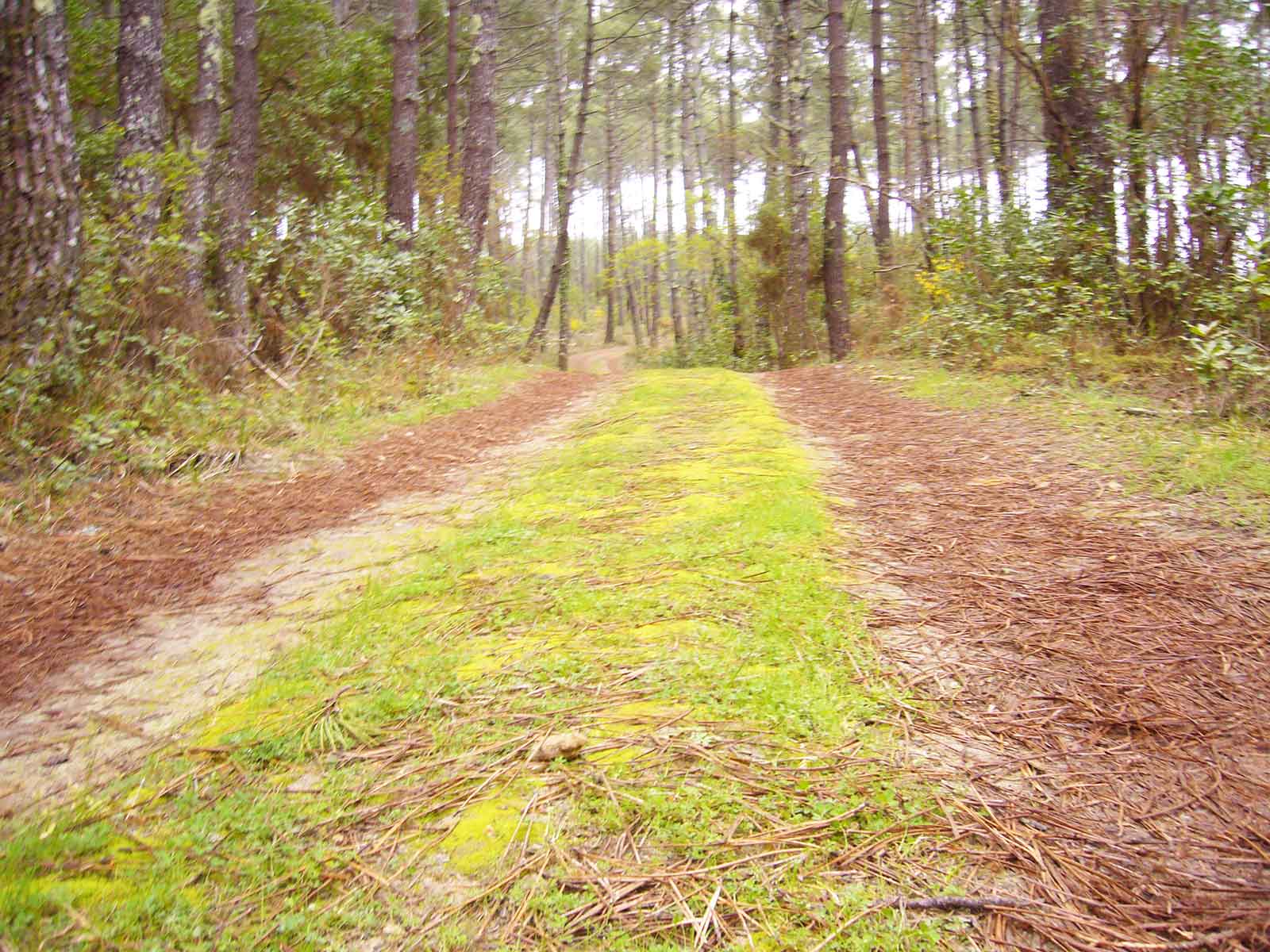 This forest track has a special charm, not only because of the environment that floods it, with green in the middle of the road and that vast expanse of pine trees but with slightly open spaces, but also because of the sensations of peace and encounter with nature that it conveys.

In any case, this road - so to speak - reaches a crossroads where we come to a semi-surfaced road that will connect us again with the southern district of Contis Plage. 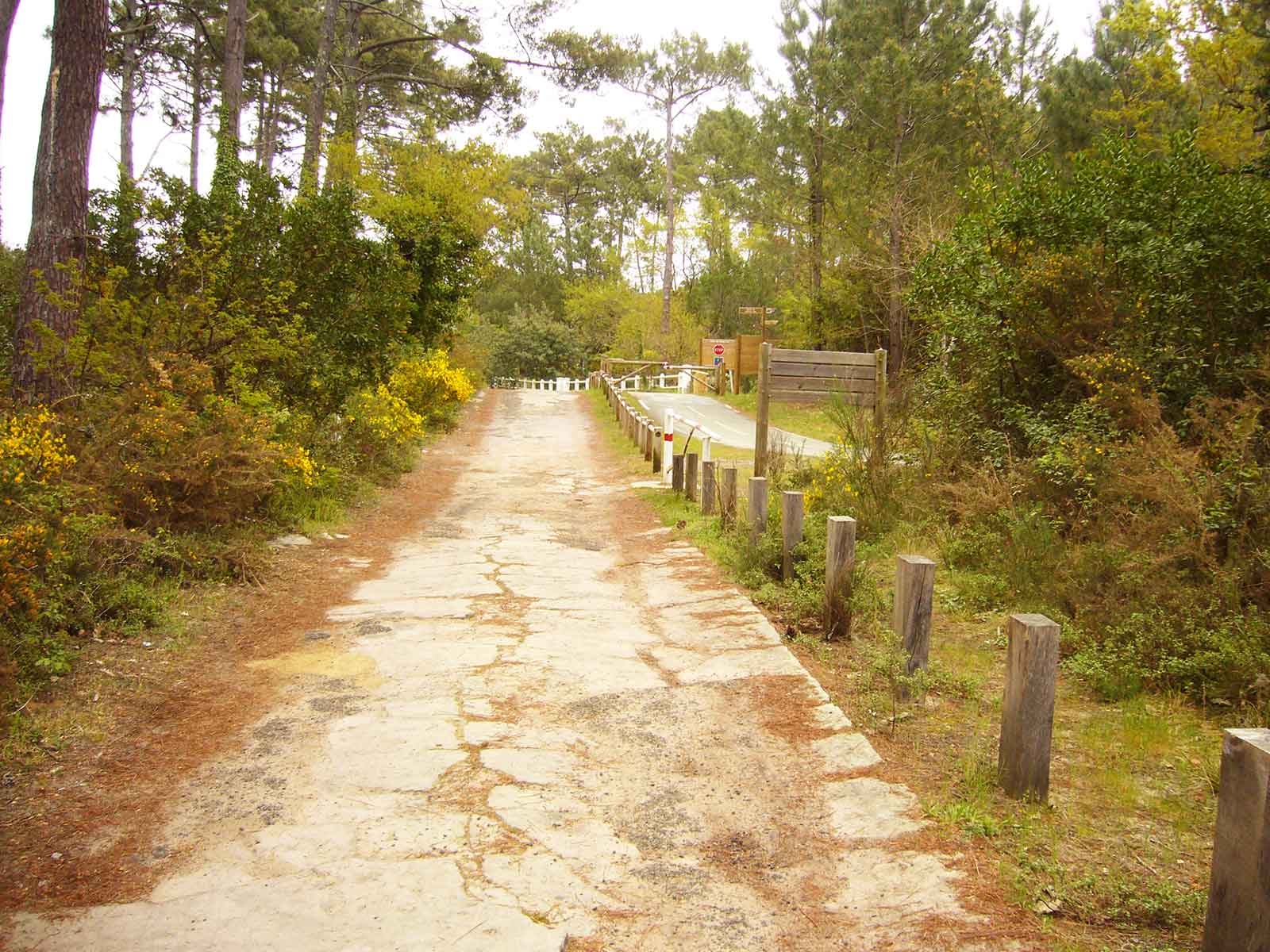 There we turn left onto this road and after a few metres we come to the cycle track on our right - part of the Velodyssee - which connects Contis with the nearby town of Lit-et-Mixe.

We continue along the same road (which from the junction with the piste cyclable is now normal urban asphalt) to re-enter the urbanisation that makes up the Contis Sud neighbourhood.

From there, just follow the signs to return to your starting point. It is a good idea to take a look at the houses that follow the street along which we are heading, as quite a few of them follow the historical model of the maisons landaises, with a peculiar structure but with certain similarities to the traditional Basque farmhouses, as well as all of them having a significant plot of land around the house. 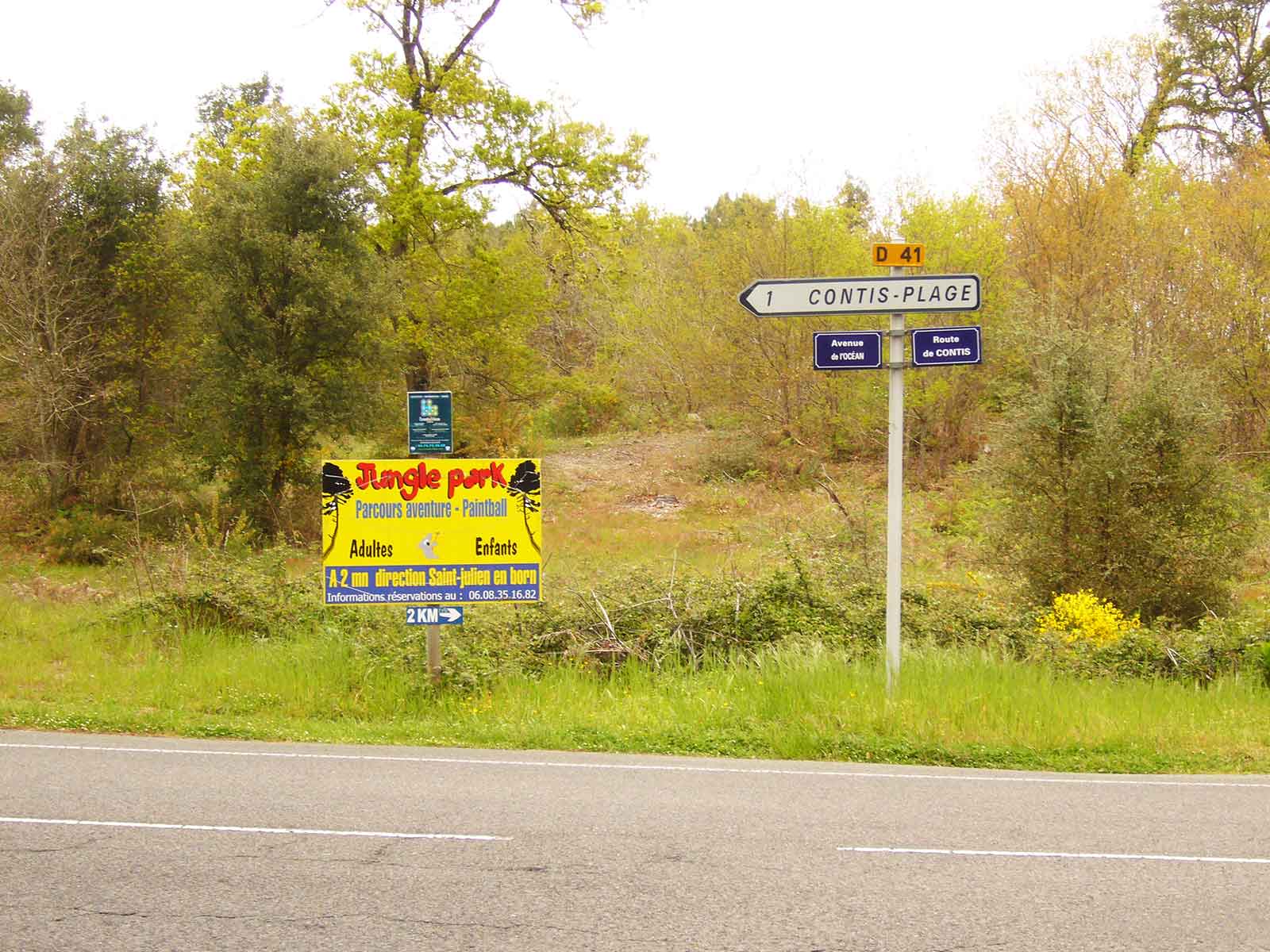 It is not in vain that a large number of Basque farmers had to emigrate to the Landes region after Napoleon Bonaparte's rule.

Once we have crossed the pink bridge again - the real border between the two areas of Contis Plage, corresponding to the two banks of the estuary - we will return to the crossroads of the main road, which links Saint Julien en Born with Contis Plage.

There we will turn left and return to the beginning of our route, always having the aforementioned Lous Serrots campsite on our left and the centre of Contis Plage at the end of the straight road we are walking along.